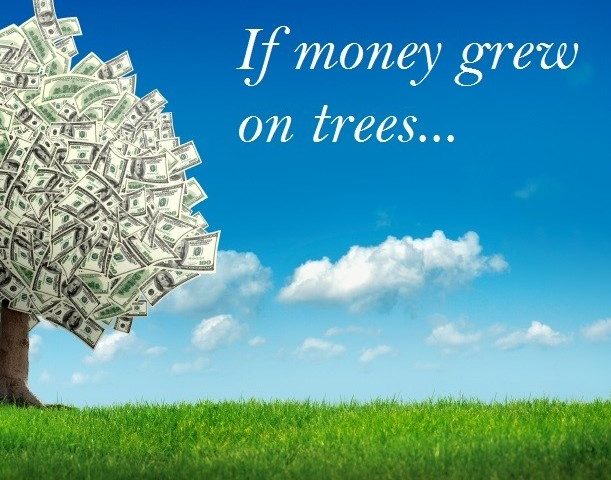 I was taught from an age that was early

To save for a day that would be rainy

Because money does not grow on trees

Then one night, I started to wonder, to think

After having one or two (or maybe three) drinks

But would our problems become extinct

If money grew on trees

What denomination would they be?

Would all that money really be free?

Would it solve all our problems?

Would it really be that awesome?

What happens when it becomes autumn?

I think more problems it would create

Some would spend more then they would take

From my tree, thus sealing their fate

What happens when the wind blows

My money from my yard to who knows?

Do I collect or shrug and say that’s how it goes?

Will there be a limit on how many trees?

If you have one can I have three

Or would you think I’m full of greed?

What about all the trees on government land?

Could I walk there and grab a quick grand

Or would going there be banned?

Who would be there to guard

If the wind blew that money to my yard?

To give it up would be quite hard

Would it be finders keepers

I’m sure there would be lots of cheaters

Back to my statement, if money grew on trees

I really don’t think it would make life easy

Because some would spend so freely

While others would save for the winter

When the money falls and starts to wither

Oh the thought makes me shiver

Can you imagine the thievery there would be?

All because some pockets will always be empty

Not thinking of tomorrow when buying what today is trendy

They watch their 100 inch tv and drive their Lamborghini

But, unfortunately, they will have no food to eat

In those long cold months with no money on trees

And thus the twist in the plot

For those that have and have not

Which brings me back to my original thought

That some people will never be happy

Even if money grew on trees

I must state it as a matter of fact, quite simply

That there are too many who act irresponsibly

Who would still be broke if money grew on trees

I don’t know about you, but for me

For those reasons I truly believe

I prefer just to have leaves on the trees For A Boat by Luke Bryan-

Buy Me A Boat by Chris Janson-

Life Of A Working Man by Creed Fisher –