What a great first weekend of college football. The Buckeyes looked like they might be better than last years team. You know, the team that had a record number of NFL draft picks.  It is early. We will see how how the rest of the season goes.
It was great to see the upsets. Houston beating Oklahoma. Texas A&M beating UCLA in overtime. Wisconsin beating LSU. Clemson almost losing to Auburn. Tennessee almost losing to Appalachian State. South Alabama beating Mississippi State. Western Michigan upsetting Northwestern. Richmond upsetting Virginia.

Texas upset Notre Dame on Sunday night. Texas was my first choice of schools to go to but out of state tuition was/is too expensive so I became a Buckeye instead.

Most of the SEC struggling to win or lost. Seven SEC teams losing in week 1.

Alabama  losing. Oh yeah, that was just a dream. They looked unbeatable , but they said that two years ago also.

But sometimes it’s more than a game.

James Conner, star running back for Pittsburgh, coming back from Hodgkins Lymphona cancer.  He broke Tony Dorsett’s records that had stood for 38 years. He was invincible…until he wasn’t. He played in the first game in 2015 then was out the rest of the year battling for his life. You can read his story in his own words here :  http://www.theplayerstribune.com/james-conner-pittsburgh-college-football-cancer/

Travis Rudolph, Florida State wide receiver,  was visiting a school and saw a boy eating alone. He sat down and joined him for lunch. The boy, Bo Paske, has autism and often eats lunch by himself. Travis says he didn’t think it was that big of a deal. We are all the same and one man can make a difference. You can read the full article here: http://mobile.nytimes.com/2016/09/02/us/photo-of-fsu-football-star-sitting-with-boy-eating-alone-at-florida-school-charms-internet.htmlnyskyz.com.

Sarah Hill, the wife of Weber State’s head coach Jay.  She was diagnosed with Hodgkins Lymphoma. Weber State football players, coaches, family and friends shaved their heads in support.  At the end of each practice they chant How strong are we? Strong like Sara. You can read the story here : http://www.sltrib.com/sports/4275503-155/weber-state-football-wildcats-rally-around

The one that really brought a tear to my eye is Nebraska. On July 23rd, they lost their senior punter Sam Foltz in a car accident. Michigan State punter Mike Sadler also passed away in the accident. On Nebraska’s first punt of the game they only sent out 10 players, the punter didn’t go out. They took a delay of game which the opposing team, Fresno State, respectfully declined. Tell me you don’t get goose bumps watching this video. http://www.ncaa.com/news/football/article/2016-09-03/nebraska-football-honors-sam-foltz-lines-10-men-first-punt?cid=ncaafbsocial_fb_sf35087046

Cheer You On by Jordan Feliz –

We March On by Hillary Scott and The Scott Family –

Beyond Me by TobyMac –

Artists Stand Up To Cancer – In an earlier post I mentioned how I like super hero movies. After an epic battle going back and forth the good guys always win. They face many challenges and there is always a time where we start to think they won’t win but they fight and overcome the enemy. I don’t think I have ever seen a movie though that I didn’t know who the good guys were and who the bad guys were. What happens when you don’t know who the bad guys are? There is also more to the story lines than just good vs. evil. Heroes that are cheered one day, then are booed the next. You have friends that turn into enemies. Brothers who turn against brothers. Enemies that come together to fight a bigger enemy. Friends (communities) that combine to save society. The battle they fight with themselves. The battle within. The battle we all fight every day. The biggest battle I fight is time. There is never enough but somehow there is always too much. Let me explain. 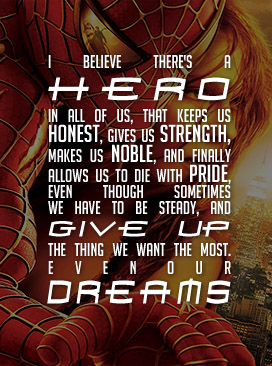 You may be thinking that time isn’t something that is within you and I can see that. But the way it makes me feel inside is the battle. The way I get frustrated if I didn’t get around to what I needed to do. The guilt I feel if I didn’t spend enough time with my family. The yuck my body feels if I didn’t work out. To me, time is very much a battle within. I also battle with the voices in my head. The one that tells me go ahead and do this or that. Just five minutes won’t hurt anything. Next thing you know those five minutes turned to sixty and I have nothing to show for it. The one that tells me I don’t have to pray today. You woke up late, you’re rushing around, got to get dressed, get to work, you don’t have time to stop and pray. Next thing I know it’s bed time and I didn’t talk to God today. I see a direct correlation between these movies and what the Bible has taught us. Look at the picture quotes in this post and then ask yourself is there a Bible verse like this. Trust me there are. Are there stories in the Bible where the hero is cheered and then booed, friends turned on friends, brothers turned on brothers, once enemies turn to friends for the greater good, communities coming together for the greater good..etc?  Yes there are.

I think I should write a post every week about the Disney Channel show Girl Meets World. Last week about investing in our children, our future. This week about being a hero. You don’t have to have super powers to be a hero. Quotes from the show “There is enough dark in this world, heroes were meant to bring the light” and “When it’s a struggle between right and wrong, that’s when real heroes fight the hardest.”

In real life we all have a hero inside us. One that can choose between good and bad, right and wrong, to help or not to help. God gave us free will so that we can make that choice. Will you choose to be a hero today?

If you need help finding a Bible verse or story let me know. I will let you know what I think corresponds to it. However, the Bible has one thing that doesn’t happen in these movies. The hero in the Bible died in order to save the villians. Even If I Could by Papa Roach (from Avengers) –

Dirt and Roses by Rise Against (from Avengers) –

Some Kind Of Monster by Neon Trees (from Iron Man) –

One Minute More by Capital Cities (from Iron Man) –

Waiting For Superman by Daughtry –

Blow Away by Breaking Benjamin (from Captain America) –