I walked by him at least twice a day.  More often than not it was closer to six times a day. He was always in the same spot, always wearing the same clothes and always staring down at the ground.

Anytime that I would walk by and I had some change I would drop it in his hat. He would never look up. He never said thank you. As a matter of fact, I never heard him say anything. I was usually on the go or on my phone or talking to my co-workers so I might not have heard him if he did, but I really don’t think he did. 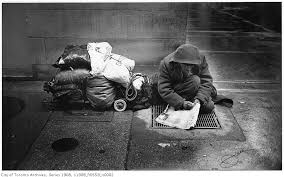 After a few weeks of dropping change, I decided to do an experiment. I started off dropping one dollar bills in his hat.  When he didn’t react I started dropping fives. Then I would drop a ten spot here and there. Nothing, no reaction from this guy. He didn’t even look up to see what I looked like.

I even got my co-workers involved. I had them start giving whatever they had on them to this guy. They all reported back the same thing that I experienced. No acknowledgement that we even existed. No thank you. Nothing. We had to be giving him enough to pay for rent somewhere.  Or at least buy some new clothes.

Many months passed. It was getting close to Thanksgiving. I had a really good year financially. Even got myself a promotion. Life was good. I was doing some early Christmas shopping and decided I would buy this guy a winter coat. I even put a hundred dollars in the pocket. I put the jacket down beside him on my way to work. Again, no acknowledgement.

I had enough. I was finally going to talk to this guy. I was going to ask him what his problem was. Why couldn’t he even say thanks. Why couldn’t he at least look up and give me a nod  at least.  Give me something man. I have been giving to you for over six months now.

As luck would have it though I was tied up in important meetings all day. I had to have lunch catered because I couldn’t get out of the office. When I left that day he wasn’t there. For the first time in as long as I can remember he wasn’t there.

The next morning he wasn’t there either. Same thing at lunch. Same thing on my way home. The entire week was the same. He was no where to be found.

The next week a lady came into my office. She asked for me by name. How did she know my name?  Anyway, turns out she was the sister of this man. She told me how Jim, her brother, that was the guys name, had cancer and it took a turn for the worse. He passed away last week. He left a note for her to give to me. I asked how she knew about me. She said it was all in the note.

She also told me more about his story. One night Jim, his wife and kids went out to eat and on their way home they were hit by a drunk driver. Jim was the only one that survived. He never recovered. He never talked again. She never learned if it was trauma from the accident or by choice. Jim just checked out of this world.

I couldn’t believe what I heard. How come I never talked to him? Was I too lost in my own world to reach out to him? Did I think I was better than him? This was another human being and all I did was threw money at him. I didn’t even try to get to know him.

After his sister left I went to my office and opened the letter. I wanted to thank you for all you gave me. I wanted you to know that I listened because I cared about you. I listened waiting for you to say something to me. I listened, and waited for you to acknowledge me.

I would give you everything you gave me back to you if you would’ve said a single word to me. I would rather have had a friendship with you than your money. I wished  you  would’ve got to know me. I wasn’t always this way.

All this time I thought he was ungrateful. What I have come to realize is how ungrateful I am. I realize how I take my life, my wife, my children, my friends, my health, my job for granted. I didn’t realize how lucky I am. No longer. I now realize how quickly all that can be taken away from me.

I also came to realize that I don’t share God or my beliefs with anyone outside my circle. I am not spreading the good news of my savior like I should.

For that, I will always be grateful for ungrateful Jim. I only wish I would’ve taken the time to get to know him. Guilty by Newsboys – I am guilty of not speaking of God enough. I want to be guilty for sharing it.

Pray For Me by Kirk Franklin –

Lean On Me by Comsumed By Fire –

Help Somebody by Van Zant –

If I Can Dream by Elvis Presley –

Humble and Kind by Tim McGraw  –