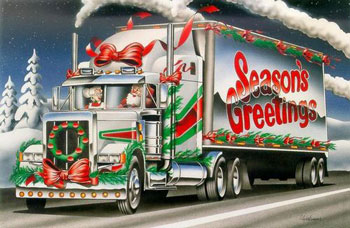 The population was booming

More and more people were being added to the naughty list

He worked extra minutes into the long night

He barely finished before the sun’s first light

Then he thought, next year I must do something else

I can’t keep working like this, doing this to myself

Then right before his tired and sleepy body hit the bed

A crazy idea, too crazy he thought, popped into his head

I need to find some magical helpers to help me

Magical helpers who could even deliver before Christmas Eve

He smiled at the thought, presents delivered every day

He could just feel the weight coming off his sleigh

He wondered what the world would think of his wonderful scheme

Then he went to sleep and had the most wonderful dream

He put his plan together all year long

There was no way his plan could go wrong

He put it into action well before October’s last day

Christmas was here before trick or treat the kids would say

He flooded your inbox with emails disguised as cheer

Buy now, order now before you run out of time

Trust me, kids, there’s no reason to wait in line

You see, Santa’s elves had finished their making by June

They sent all their gifts to a magical place called Amazon

Santa’s idea was going as planned and working perfectly

This year, he wouldn’t have to go down one single chimney

They said they were ready and awaited their orders

Then the orders came in and they hit the roads

You know them as Amazon, UPS, USPS, and FedEx

Be sure to thank those who deliver near and far

Because now you know who they truly are

They are more than just drivers, they are Santa’s magical helpers

Thank his magical helpers who already brought your gifts before tonight

Santa’s Got A Semi by Keith Harling –