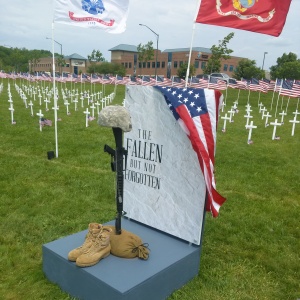 My dad served in the Vietnam War. He never talked much about it and I never asked. To be honest, I can say I didn’t care that much. Now he is gone and I will never be able to tell him thank you. It wasn’t until his funeral I found out he had lived with the  effects from Agent Orange. How could I not have known? How could I have never asked ? This memorial day has hit me harder than any ever. Yes, I know the freedoms I have from those that have served, but I believe it was something I just took for granted.  Many of us in this country take this for granted. We have not seen firsthand how many in the rest of the world live (and many in our own country), not only to not be free but just to have food, clean water and shelter on a daily basis. There were many instances (from the Field of Flags, songs, videos and news stories) this weekend that have brought tears to my eyes. I know it’s too late but I pray you hear me in Heaven, thank you Dad.

Today visit a veteran. Help a widower and their children. Give to a charity for a veteran. Don’t know any veterans? Go to a senior citizens living center and talk to someone there. I bet they would love the company and probably know a veteran they could talk to you about.

John 15:13  Greater love has no one than this: to lay down one’s life for one’s friends.

There are so many songs and even entire cd’s ( Act of Valor movie soundtrack or American Soldier by Queensryche) that I could list here but I wanted to list some that maybe many of you have not heard of, as well as a few most of you have. Some I have not listed but you can look up George Jones- 50000 Names, Sammy Hagar- Remember the Heroes, John Michael Montgomery- Letters From Home, Drowning Pool- Soldiers, Chely Wright- From the Bumper of My SUV, Mika- Heroes, Carrie Underwood- Just A Dream, Van Zant- These Colors Don’t Run, Charice- Note to God, Letter Black- While You Were Away, Darryl Worley- I Just Came Back From A War, Nathan Fair- Fallen Soldier, Tracy Lawrence – If I Don’t Make It Back among many others.

Talk video, not a song but worth watching.

10 years, I Miss You Daddy by DJ Sammy (feat. Do) – Seriously, I have never listened to this and not cried.

For You by Keith Urban –

Soldier, I Thank You by Jordan Leigh –

I Want You To Live by George Canyon –

A Soldier’s Memoir by Mitch Rossell –

Soldiers and Jesus by James Otto –

Pvt. Ledbetter by Tesla – one of my favorite bands from the 80’s and today. Keep making music.

Letters From War by Mark Schultz –

If You’re Reading This by Tim Mcgraw –

I’ll Be Brave This Christmas by Big Daddy Weave –

Some Gave All by Billy Ray Cyrus –